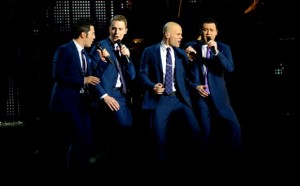 PBS Favorites will Appear at

The New Bern Historical Society brings Under the Streetlamp to New Bern on their nationwide tour, February 16, 2015. Under the Streetlamp will perform favorites from the Four Seasons, Beach Boys, Temptations, Beatles, and much more. This dynamic foursome, a PBS favorite, delivers an electrifying evening of classic hits from the American Radio songbook, bringing their unique blend of tight harmonies and slick dance moves to your favorite Doo-Wop, Motown, and classic Rock ‘n’ Roll hits.

On this Presidents’ Day Monday, the New Bern Convention Center will rock with the sounds of your favorites from the 50’s, 60’s and 70’s. Historical Society Executive Director Lynne Harakal is excited to have such a nationally known group in New Bern.  “The performers are from the cast of Jersey Boys. The Historical Society is thrilled to bring that kind of talent to New Bern.”

General admission tickets are $38, sales tax included, and $35, sales tax included for active duty military and their dependants. Sponsor tickets with premium seating are also available. Tickets go on sale December 1st and will be available at the New Bern Historical Society office at 511 Broad Street or online at www.NewBernHistorical.org, and at outlets after January 1st.

Timing for this concert is perfect for Christmas gift giving, and the first 100 ticket buyers will receive a specially crafted holiday gift envelope.

To get in the mood for Under the Streetlamp, right here in New Bern, watch on them on your PBS station, November 29th. You won’t want to miss it! For more information call the New Bern Historical Society at 252-638-8558 or go to www.NewBernHistorical.org.  All proceeds from the concert go to support the Historical Society’s ongoing educational programs, New Bern Battlefield Park, and Attmore-Oliver House.