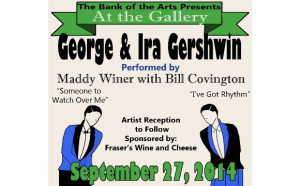 The 20th Century has been called “The American Century,” and 20th century American music has been called the largest and most important American contribution to the world’s supply of art.  What better place then to celebrate the Great American Songbook than at New Bern’s Bank of the Arts?

Beginning in late September, Craven Arts Council and Gallery will present a series of 8 performances entitled “At the Gallery:  20th Century American Composers.”  Each concert will feature one of the best of the contributors to that distinctly American volume of wonderful music.

The first in the series is a presentation of the work of George and Ira Gershwin by Maddy Winer, who wowed New Bern audiences last February with her performance at the Sunday Jazz Showcase at the DoubleTree by Hilton New Bern Riverfront Hotel.  Accompanying Ms. Winer will be Bill Covington, pianist at Asheville’s Grove Park Inn.  The concert begins at 7:00 pm on Saturday, September 27, and will be followed by a wine and cheese reception at the Bank of the Arts, sponsored by Fraser’s Wine and Cheese.  Tickets for this performance are $15 for members of the Craven Arts Council and Gallery and $20 for non members and are currently on sale at the Bank of the Arts or via Pay Pal from the Craven Arts Council’s web site, www.cravenarts.org.  The Bank of the Arts is located at 317 Middle St. in downtown New Bern, and the phone number is (252) 638-2577.

Ms. Winer’s performance of the Gershwin classics will be followed in October with the work of Johnny Mercer, to be presented by John Van Dyke on vocals with Brandon Banks at the piano, and in November with the swinging sounds of Duke Ellington, presented by Heather Pierson on vocals and piano with Shawn Nadeau and his stand-up bass.  Ms. Pierson and Mr. Nadeau will be making this stop in New Bern as part of their Southeast US tour.

In January, 2015, jazz pianist LeRoy Plock of Winston-Salem will present the work of Sammy Cahn with vocalist Renee Henry.  February’s performance features the music of Jerome Kern, presented by Dirk Lumbard, vocals and maybe a bit of dance, with Mollye Otis at the keyboard.  Mr. Lumbard and Ms. Otis are both faculty at the East Carolina University School of Theater and Dance.  In March, Ms. Winer and Mr. Covington will return to present the ground-breaking work of Irving Berlin, and Mr. Van Dyke and Mr. Banks return in April with the sounds and songs of Harold Arlen.  Mr. Plock will return in May, with vocalist Leigh Harris, to close out the series with the work of Frank Loesser of “Guys and Dolls” fame.

Each performance will be followed by a wine and hors d’oeuvres reception, not only as a meet-and-greet for the artists, but more importantly as a social time for the audience to linger and enjoy one another for a while before heading home.

All of the details can be found at the Craven Arts Council and Gallery web site, www.cravenarts.org, at the Events tab. The series is presented in cooperation with the Down East FolkArts Society, www.downeastfolkarts.org, and media sponsorship will be provided by Public Radio East, www.publicradioeast.org.