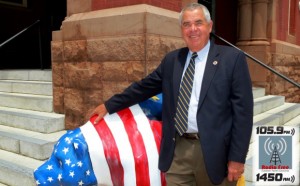 Laura Johnson and I enjoyed meeting with Denny Bucher, Alderman of Ward 3. Denny’s running for Mayor of New Bern and he shared how he plans to address current issues and how he can make a difference in New Bern if he’s elected during this radio interview with Laura Johnson. The interview will air on Radio Free ENC’s WNOS 105.9FM and 1450AM. Listen to the audio here:

When asked why do you want to be Mayor of New Bern? Denny responded, “During my adult life, I’ve moved 14 times, lived in 8 different states, and my job kept me from getting involved in anything community wise”. When he moved here with his family 13 years ago, he decided he wanted to give back to the community that he’s proud to call home.

Laura asked him what made him uniquely qualified to be Mayor. Denny believes there are two things. The first is his perspective of having lived around the Country. “A number of the Candidates were born and raised here and that’s neat, but they haven’t had the experience I’ve had in living in many cities and towns around the Country”. From the Northeast, Midwest, and the South, he’s lived all over. So he feels that gives him a perspective that they don’t have. He believes that having 40 years of business experience gives him an advantage.

Denny’s business knowledge spans from working with a large corporation in senior management to starting businesses with his family in New Bern. Denny believes that using his experience and leadership skills makes him the most qualified person to lead the City of New Bern as Mayor.

Laura asked, “Of the issues facing the city, which is the most important?” Denny said, “There are a lot of issues”. He referred to the results of the Branding efforts from North Star Destination Strategies. They said we are a small town with some big city problems. Denny thinks the biggest issue they need to work on, that they already started “is bringing businesses, jobs, tourists, and residents to New Bern”.

“New Bern is a great place, but a lot of people don’t know about New Bern. His particular concern is in the past 10 – 12 years. We’ve added many thousands of residents to the city. We’re now at 30,000 residents. Our jobs and businesses haven’t kept up with that. If you take a look at the last ten years, we’ve added very few businesses, very few jobs, and that’s a big concern. Because a lot of our sales tax dollars that we should be collecting are going to cities like Greenville, Morehead City, Jacksonville, and others. So bringing businesses to New Bern will be my top priority.”

Denny Bucher would be glad to talk to any resident about any issue in the city. For more information, please visit his website,  or Facebook page, call 252-639-9906, or send him an email.

Special thanks to Alderman Denny Bucher for taking time to talk about your plans if elected as Mayor of New Bern!