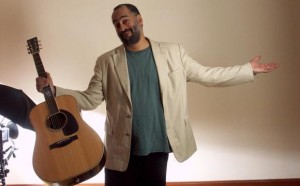 The 25th season of Down East FolkArts Society concerts is off to a super-charged start as Vance Gilbert returns by popular demand for a third visit to New Bern and Beaufort. Vance burst onto the singer/songwriter scene in the early 90’s, and was invited by Shawn Colvin to be a special guest on her Fat City Tour where he got rave reviews and the unheard-of…encores for an opening act!  Reviews describe him as having “the voice of an angel, the wit of a devil, and the guitar playing of a god”. As a black man in the folk music scene, he has broken barriers and defies being pigeonholed. His jazz roots show in sophisticated melodies and harmonies, and his onstage banter shows the influence of the couple years he spent opening for George Carlin. Don’t miss this one-of-a-kind performer!  Tickets are $15 general, $12 members, and $8 student. For more information, see www.downeastfolkarts.org or call 252-633-6444.