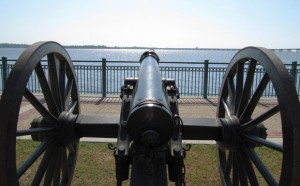 Last Known Son of Civil War Veteran to be Honored

Four local groups have come together to recognize all those who fought and died 150 years ago during the Civil War.  A coalition of the Climbers Club, the Earl of Craven Questers, The Family History Society of Eastern North Carolina and the New Bern Historical Society invites the public to gather on Saturday, May 12, 2012 to remember Union and Confederate soldiers alike.  A 2p.m.ceremony at the Attmore Oliver House will feature music and light refreshments.  The gathering will also honor Mr. Luke Martin who is the son of a Civil War soldier.  His father was a member of the U.S. Colored Troops.

Following the ceremony, the participants will proceed to Cedar Grove, Greenwood, and National Cemeteries.  A wreath will be laid at each location honoring Confederate, Union and U.S. Colored Troops.  A U.S. Marine Color Guard will be on hand to honor the Veterans and the New Bern Fire Department Pipes and Drums will also participate.