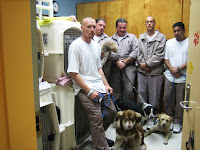 We all make mistakes; some people make bigger ones by committing a criminal act. I don’t condone criminal behavior, but believe most people sentenced to a crime, pay their time, and receive professional treatment, should be given a “new lease on life”. This concept parallels the “New Leash on Life” (NLOL) program which rehabilitates dogs with moderate challenges.

The NLOL is a program that motivates inmates within the North Carolina Department of Corrections (NCDOC) System to become better citizens. The NLOL program gives inmates the opportunity to train mistreated and/or abandoned dogs and prepare them for adoption. It’s a win-win situation for the dogs, our community at large, and the inmates. Inmates can learn life skills by caring for animals, performing community service, regaining self confidence, and discipline. In turn; the dogs build trust for humans, learn basic obedience skills, and turn into well-behaved pets for future owners. Best of all, the dogs live to see another day!

I visited the Craven Correctional Institution (CCI), one of the first (Pilot) facilities that introduced the NLOL program. I met the Assistant Superintendent for Programs, Errol Reddick; Program Supervisor, Tammie Stocks; and NLOL Coordinator, Sherry Smith. Sherry led me on the tour of the kennel where I met the six inmate-trainers, Grady Meredith, Eduardo Almanza, Gregory Butler, Julian Skipper, Bryan Jackson, and Danny Edwards. Instead of playing cards or exercising all day, they devote their time in prison to become dog trainers for neglected dogs.

The current class consists of Oscar and Smuckers, who came from Craven/Pamlico Animal Services and Sonny and Marley who came from Beaufort County Animal Control. For eight weeks, the six trainers will teach the four dogs’ positive reinforcement and repetition training, 10 – 12 hours per day. Once the class graduates, the trainers start the cycle over again with four new dogs on the same day.

The dogs start out learning their boundaries and limitations and get to know their trainers. All instruction is conducted as a group. If one of the dogs is a little slow learning a command, the other dogs will wait until the dog has conquered it before they move to the next level. The dogs learn basic obedience skills, house training, and socialization, through positive reinforcement and repetition.

Grady, Eduardo, Gregory, Julian, Bryan, and Danny keep a daily journal. They write about the dogs’ behavior, which teaches them self discipline. Journal writing has been known to therapeutically allow people to share their feelings and help resolve personal issues.

Both the prisoners and dogs naturally create a human-animal bond. This special bond fosters trust for the dog and increases the inmate’s confidence by becoming a caregiver for another living being. The animals learn key obedience skills and the trainers learn responsibility, discipline, and other skills needed to adapt to life on the outside.

This unique program builds a bridge between the inmate and the local community. By giving back to the community, inmates learn self respect and feel good because they made a difference in the dog’s life. They transform a skittish and unloved dog into a well mannered pet to be placed into loving homes. This also improves relations between Officers and inmates.

Drake Parker, Master Dog Trainer of the Top Dog Academy in Greenville, monitors the dogs’ behavior during his visits each week to the facility. He evaluates each dog as they sit, lie down, walk on a leash, and stay. Then he adds distractions to see how the animal reacts. Dogs are ready to graduate once they pass their final evaluation.

Inmates are eligible to complete apprenticeship programs, receive Dog Trainer and/or Animal Care Provider certifications. Grady Meredith, the senior trainer, obtained his Advanced Professional Dog Trainer certification through the Department of Labor. When inmates are released from prison, they will have earned fundamental vocational skills to work in the pet industry.

CCI celebrated their five year Anniversary during the graduation ceremony held on February 10th by rehabilitating 120 dogs with 100% success rate.

Besides making a difference in a dog’s life, the program also receives motivational highs when they receive photos and updates through emails and letters sent from happy new dog owners.

Support the partnership efforts of our local animal shelters, rescue, and non-profit agencies with the NC Department of Corrections. How can you help? Sponsor a dog or provide monetary donations to the program for food and supplies.

Why support the NLOL Program? “As of March 25, 2010, 1003 dogs have completed the program statewide. 923 have been adopted immediately following completion of the program for a 92% rate of adoption. The dogs not immediately adopted are returned to the community partner for adoption at a later date.” – NC Dept of Corrections

To see more pictures of the dogs and trainers, visit NBN’s Photo Gallery